Canyon ZCC take performance testing to the next level with Diagnose Berlin & Inscyd.

Despite the Coronavirus pandemic, over the last couple of months the cycling eSports season finally slowed down as teams and riders took a well-earned break. For us, this was the perfect time to partner with Diagnose Berlin and put the riders through some new physiological tests that Inscyd has developed for remote athletes. For a team that's spread out across the world, this was the perfect solution and undoubtedly will become the standard for our discipline of cycling.

The results that we got backed proved to be really interesting and supported our hypothesis that it's not that our riders know how to ride Zwift better than say, a World Tour pro but that their bodies are also better adapted to these sorts of efforts. We caught up Raphael Jung, founder of Diagnose Berlin to chat about the findings and what this means for the team and riders.

Firstly, Raphael, can you give a quick overview of the tests that the riders had to do and why the testing is done in this way:

The so-called power performance decoder is a new functional testing procedure created by Inscyd. The testing is composed of different all-out efforts of various time frames, spread over a couple of days in order to get a full picture of the overall capabilities of each rider. The software looks only at the functional outcome (that means the pure power output produced) on specific intervals and links that to physiological conditions (based on scientific findings in testing studies).

The most important things to highlight here are:

These three standalone estimates are then cross-validated against each other. We do this so that it's possible to detect outliers and enables us to "fit" these three variables together with an algorithm so that an overall plausible relation can be found. 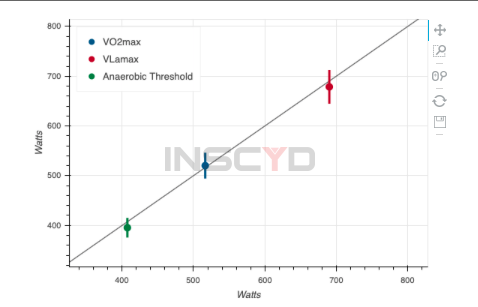 This new test is perfect for a team like ours that is not based in one location. How does the Inscyd testing compare to going to a lab in person?

It's quite simple. The main advantage is that you are mostly independent of time and localisation of the testing procedure. And that is not only an essential thing for eRacing teams but also World Tour teams. It is now very common for Pro riders to also be spread across the globe, and it's incredibly challenging to find time slots during a regular season where they can bring all the riders together in one place to be tested.

The test allows you to stay in your usual surrounding so that your performance isn't affected by artificial lab conditions, which are known to produce different results than in the real world. This can be a positive or negative aspect of the field-based test.

On the one hand, it's incredibly convenient because the only thing you need is a (precise) powermeter and a week with stable conditions. However, the rider must produce clean and precise data. A lab doesn't have that problem as it recreates the same conditions every time you visit. Regardless, there will always be a day-to-day variance in things such as sleep quality, time of testing, and so on that can also influence the results.

The significant advantage of the Inscyd field test, in the end, is the almost unlimited access to testing, which makes it much more relevant and useful.

What did you discover through this testing and how do our rider's results compare with a typical World Tour pro?

Some of the results were really surprising - so much so that we initially doubted the correctness of the measurements. On some of the intervals, a couple of riders produced higher power numbers in w/kg than usually reported for World Tour pros (we conferred with some pro-level coaches for evaluation). But those riders proved that they are capable of such efforts on many other occasions. With every step of comparing, discussing and analysing those profiles, we came to a clearer picture that these datasets represent something not only exceptional but entirely realistic! 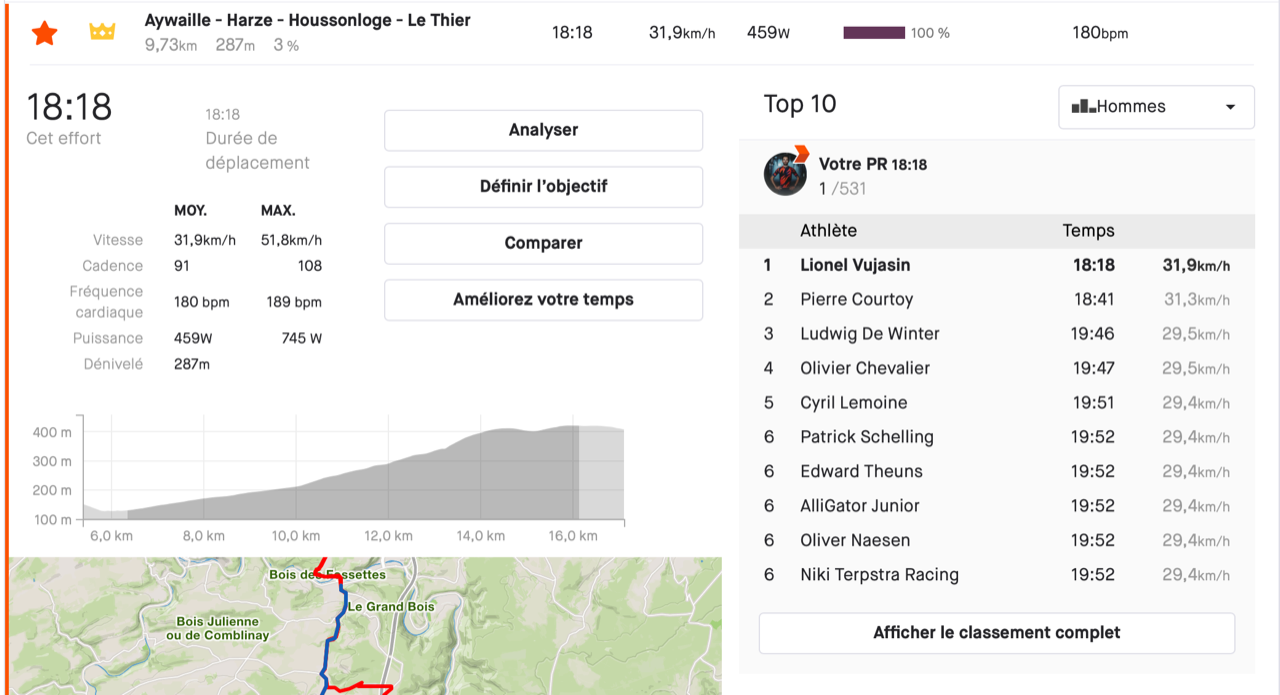 You'd think that both World Tour riders and eRacers, more or less, have the same skills as they are both competing in the sport of cycling. But in reality, it's entirely two different worlds! World Tour riders are very much endurance-trained to be able to survive multiple hour races - sometimes on consecutive days. In contrast, Zwift races rarely last longer than 60 minutes and are full gas from the first second.

A similar comparison would be between a world elite ultra runners (those guys that do 100km runs) with the world's best 5k runners. They are both "good runners", but nobody would ever consider that a fast 5k runner would perform at the same level at ultra-distance. Sure, they could do well, but they wouldn't be able to keep up with the best, and many more might not even finish. That's precisely the case between eRacers and World Tour riders. 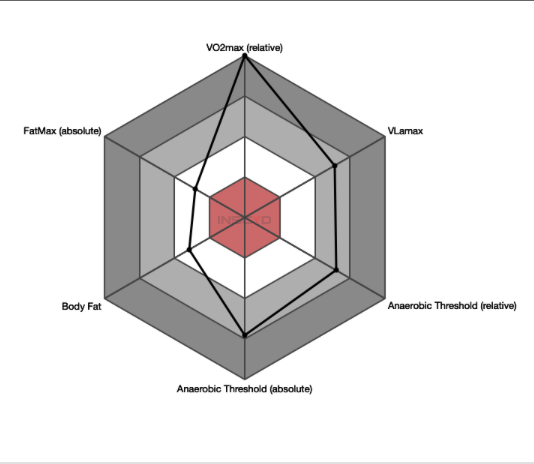 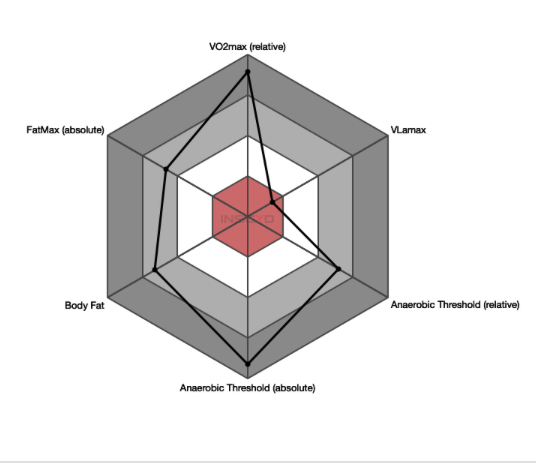 Was there anything in particular that surprised you?

All the riders had high measurements in terms of anaerobic capacities. However, this was to be expected as they perform a lot of anaerobic efforts in training and races. What as unexpected was the extremely high output in the 2.5-minute interval of some riders which was only explainable also with very high aerobic abilities. Calculations for some of the riders' VO2max exceeded 90 ml/min/kg (as a reference, the reported "record" in terms of VO2max is 96.7 1 ). Initially, it seemed unlikely, but we re-calculated and tested again. In one case we validated the VO2max with a lab test and measured an 88 ml/min/kg (which was 3% off of the prediction. This figure is within the measuring tolerance of spirometric systems). So these riders are extremely "specialised" to an extent that we wouldn't have considered before. 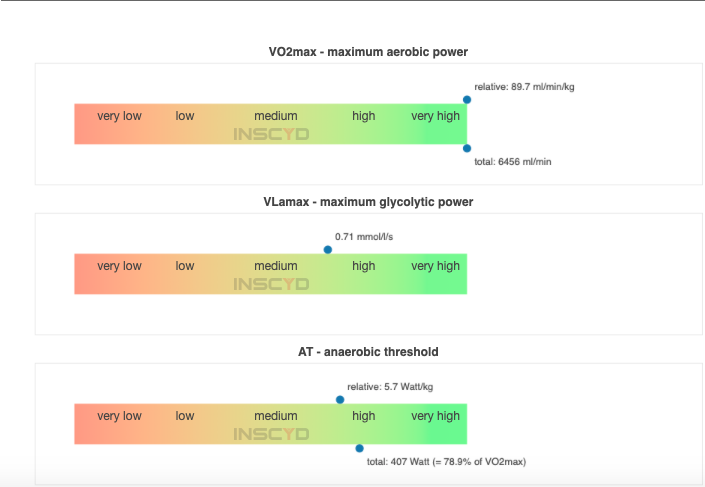 Now that the riders have a complete overview of their metabolic profile - what is the best way to utilise this data?

The first and most crucial step was to explain to each rider what the numbers from the results meant. This allowed me to give a clear overview and provide logical explanations to many of the things that the riders had experienced, but couldn't fully explain. We then helped to establish an understanding of strategic training tailored to the strengths and weakness as well as a scope of expectations. With some riders, it felt like we were giving them a "perspective" and to others a new picture of what they would be able to achieve and how they could attain it.

What did the riders think?

Now that the riders have this depth of knowledge and data surrounding their abilities, it's worth finding out from a few of them what they thought of the tests, the data and how they are actively using the information:

Testing with Diagnose Berlin has helped me identify and dial in on the specific areas where I had the most room for improvement, accelerating my overall growth as an athlete. Raphael was incredibly knowledgeable, not stopping at just telling me what I could improve on, but taking the time to explain to me the metabolic processes involved and WHY I can improve in certain areas.

Working with Diagnose was quite an eye-opener for me. I knew that being a top level eRacing athlete wasn’t only due to game knowledge. I’ve totally focused my training on the specific demands of virtual racing and previously had no confirmation of whether I am working in the right direction. Being able to match some of my numbers to some of the best athletes out there was really encouraging.

My experience with the remote testing left me pretty impressed. When I received the results, they were almost to the decimal equal to my last lab-test: same ftp, same vo2 and same vla. This left me pretty much assured about three things: 1. The tests, three different kinds of efforts over three days, and the diagnosis based on those tests, are as accurate as any diagnosis you get from lab testing 2. The power sources I use are well aligned with pro lab equipment. Finally, 3. The pain performing the test-efforts, whether remotely or in a lab, is equally insufferable!

Having completed many lab-based performance tests in the past the INSCYD Power Performance Test was very similar in many respects. The procedure and effort felt very similar despite being performed at home and you don’t have the stress or invasiveness usually associated with lab tests.

eRacing does have an issue with legitimacy and transparency - which is more of a growing pain than anything more sinister. A large chunk of responsibility lies with the racing platforms such as Zwift who need to do more to support riders and teams. But it is also incumbent upon teams like ours to minimise any margins for error and have as much data as possible to back up performances. We already have a Transparency code which specifies that our riders will all dual-record using their Infocrank powermeter and Kickr trainer, as well as undergoing all tests required by ZADA.

We believe that the physiological profiles of our riders gives us another layer of data to show that our performances are legitimate. Hopefully, more teams will consider following suit, and it becomes more of a norm over time.